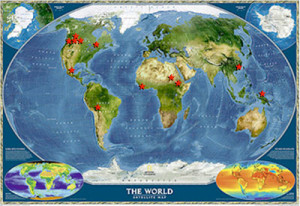 There are currently between 5,000 and 7,000 languages spoken in the world today, with numbers of speakers ranging from tens of millions to a mere handful. Many of these languages are disappearing, and current estimates place between 50% to 80% of them in danger of disappearing before the end of this century. The LDRC currently houses several projects aimed at the documentation, preservation, and/or revitallization of minority and endangered languages throughout the world.